The quasi-last class in my New Media course was the occasion to close a discourse begun with the article The Web We Lost by Anil Dash. The message was essentially that it is quite difficult, for people who were not born in the pre-Web age, to fully comprehend the transformation it brought. Our students need to understand that the Web was built with great ideals (openness and sharing first as a precondition on all the features) which were  antagonized by the typical IT companies. Had it been for Novell or Microsoft we wouldn’t be here, no doubt. But the point is precisely this, our students do not have that doubt because they weren’t there, and they only have access to the facelifted Bill Gates proclaiming how marvelous the Web is, today –and talking on the benefits of Web-based education. 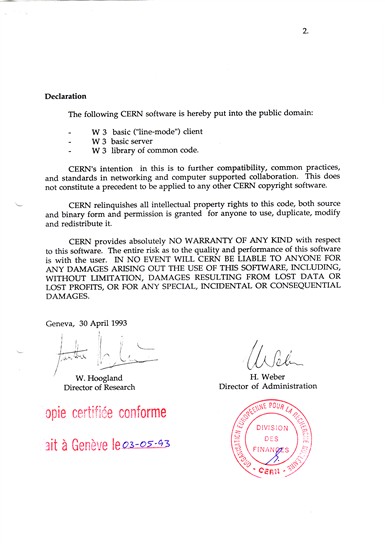 “CERN relinquishes all intellectual property rights to this code, both source and binary and permission is given to anyone to use, duplicate, modify and distribute it.” Geneva, 30 April 1993.

Students do not know this and we must make them appreciate such simple facts. They live the Web and work within it: it is part of their lives, for better and for worse. A consequence of this lack of experience is that they don’t either understand the dangers of the Web being taken away. There are a series of troublesome scenarios which I discussed the past Monday and I want to resume them here for their benefit and mine. They are more encompassing than the sole IT discourse would normally imply.

1. The problem of monopolies is huge and is eroding the freedom endowed to the Internet and consequently, the Web and society. Monopolies are also, unfortunately, nefarious for the very health of democracy and of public wealth. Well, we know this for sure, so what’s new here? The problem is that we don’t know we have one. While up to some extent we all know that Microsoft abused of its dominant position with operating systems and was thus held guilty of monopoly practices before the US Department if Justice and the European Commission, we have already forgotten this and Microsoft is still the number one purveyor of browsers in the world. Forget of Firefox or Chrome. People use IE because it’s there. So, this is still a monopoly in practice. On the other hand, Microsoft’s dominant position is nothing when compared to another dominant position of a giant of whom we wouldn’t suspect. It’s Google. Google does everything for us, for free. And they pledged to “do no evil”. They actually don’t, and we all love their innovations and inventiveness. The problem is that they own information, period. Almost all of it. The other problem is that we need Google (we are dependent on it) and we hate it at the same time, because it impedes the growth of many industries. Take the case of the publishing industry. Mathias Döpfners, CEO of the biggest publishing group in Europe, Axel Springer, wrote Google’s CEO Eric Schmidt a dramatic open letter (Why We Fear Google) in which he states that they are essentially dependent on Google (they love it because of the revenues they get from the traffic received via Google and “Google’s algorithm for marketing the remaining space in its online advertising”), but they are also afraid of it. And they joined a European antitrust action against Google. Döpfners quotes Schmidt:

You [Schmidt] wrote it yourself in your book: “We believe that modern technology platforms, such as Google, Facebook, Amazon and Apple, are even more powerful than most people realize (…), and what gives them power is their ability to grow – specifically, their speed to scale. Almost nothing, short of a biological virus, can scale as quickly, efficiently or aggressively as these technology platforms and this makes the people who build, control, and use them powerful too.”

That’s the danger. Nobody in the world has the power nor the resources to scale to Google’s level and reap the benefits. Thus, like the Axel Springer group, we all need Google (we love Gmail, Google Drive, YouTube, and so on…) –and we all love Google even though we know it invades our privacy, but later for that– but we are afraid of it and we can’t grow if it continues its dominant practices. Monopolies are dangerous: This one can destroy the Web –and society. (Read also The New York Times and The Guardian on Döpfners’ reaction to Google). The Guardian, in particular, titles its article with an emblematic “Google is building up a digital superstate…” with the giant taking advantage of its superior market position by discriminating “against and weakening of any competition”.

2. Which brings me to point 2 of my class discourse. The digital superstate (any resemblance with the third reich?) A superstate is growing out of a nowhere land where the powers of an all-controlling society have already weakened our concepts of democracy. Again, Döpfners quote Google’s CEO:

And questions “We need to ask ourselves whether competition can generally still function in the digital age if data are so extensively concentrated in the hands of one party.”

I stop here with a last quote from Mr. Döpfners in his remarkable letter. Ponder it well, my dear students, because in it lies the truth which will bring prosperity or the end of democracy.

In 2009 you [Schmidt] said: “If you have something that you don’t want anyone to know, maybe you shouldn’t be doing it in the first place.” The only sentence that is even more worrying comes from Mark Zuckerberg when he was on the podium of a conference with you and I in the audience. Someone asked what Facebook thinks of the storage of data and the protection of privacy. And Zuckerberg said: “I don’t understand your question. If you have nothing to hide you have nothing to fear.”

Ever since then I have thought about this sentence again and again. I find it terrible. I know that it was certainly not meant that way. Behind this statement there is a state of mind and an image of humanity that is typically cultivated in totalitarian regimes – not in liberal societies. Such a statement could also have come from the head of East Germany’s Stasi or other secret police in service of a dictatorship. The essence of freedom is precisely the fact that I am not obliged to disclose everything that I am doing, that I have a right to confidentiality and, yes, even to secrets; that I am able to determine for myself what I wish to disclose about myself. The individual right to this is what makes a democracy. Only dictatorships want transparent citizens instead of a free press.

3. The last point I made was that not only is all this happening, but the way the majority of people are experiencing the Web is not direct, but instead through some intermediary, like Facebook. I do not trust much of Facebook (especially after the words of its founder, so dangerous), but I give it an enormous value for social networking and exchanging information. I am afraid, however, that many people only see the Web through the Facebook portal. This is scary, my dear students, because it seems a lot like reading just one newspaper. True, we can read different pieces of newspapers from within Facebook, but given that our information sources have views that are usually similar to ours, the diversity of the news ultimately getting at us is practically insignificant. I don’t like this, folks, and neither should you!

I rest my case, dear students. Be advised: read and go through stuff with your (open) mind and all your antennas functioning well. Long live the Web! Defend it.