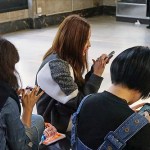 Yes, this is a question, inspired as it is by Sherry Turkle’s new book (Reclaiming Conversation: The Power of Talk in a Digital Age, Penguin Press 2015,) and my friend Dan Ausbury’s own reflections which he’ll share with our inf115 class later.

Alan Levine suggested in one of our brainstorming sessions at STEMmED, to elaborate around Turkle’s ideas through a compelling tool named Hypothes.is. This is a note-taking plugin that can be added to a browser. With it people can add chunks of annotations on any text segment from an article, be it on a webpage, a pfd file, etc.

In preparation for next class, I’m leaving here for reference two articles: one written by the very Dr. Turkle on the NY Times, and another, which Alan suggested, of a contrary opinion. We’ll explain later what is the job to be done.

Another reference may be the review on Turkle’s book published on The Atlantic: The flight from conversation by Lauren Cassani Davis, 7 Oct. 2015).