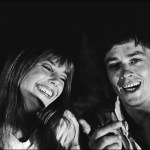 I just want to talk a bit here of two films I watched, and that were quite inspiring. I saw first IMDB: A Better Splash (2015), and only later the original IMDB: La Piscine (1969) from which the former was remade.

La Piscine stars Alain Delon and Romy Schneider as the main couple who, while on vacation in a gorgeous villa on the French Riviera receive the weird pair of an exuberant, extroverted father with his daughter (Jane Birkin).  So the first thing is the force of the main couple in terms of acting. Both are extraordinary names and the image they project is fantastic. They get opposed to the visiting girl, played by a shy Jane Birkin, who will get seduced by Delon.

In the remake Splash we get opposing situations: the couple in the villa is played out by one main, strong acting presence, Tilda Swinton, who has a companion of no transcendence. The couple get exposed to the whims of the exuberant visiting father (Ralph Fiennes) and his daughter (Dakota Johnson). So, in terms of actors, the strong pair of the original villa couple gets opposed to another strong pair in the remake: that of the visiting pair.

Plus, in Splash, it is the visiting girl who seduces the woman’s husband. We have an inverted symmetry, quite lovable. Well, one of the things of the film is who seduces whom, right?

I enjoyed watching both films. Fiennes and Swinton are impressive in their crossover relation; as are Delon and Schneider in the matrimonial relationship. Of course, the Delon-Schneider couple is quite more mystical than the newer one, and so is the original picture, with old kodacolor spell. Birkin and Johnson are simply wonderful girls: the former shy and very measured; the latter always playing the seductress role.

The newer film has a few down moments, however, and between the accompanying actors of both pictures, I prefer the French one, over Swinton’s husband. More centered, more presence.

Then, of course, there is the piscine itself and its background: in the Côte d’Azur in the original, and the isle of Pantelleria in the second, at the very south of Italy. There is green, sea, snakes, and some very good cooking.

And last, the rivalries, man-man competition –homo homini lupus–, and ultimately, death. It’s a fine revisitation of the old theme of four people enclosed in a solitary enclave. Sooner or later, some will provoke something bad to happen.

A Bigger Splash: The two couples. Swinton, Johnson and Fiennes

A Bigger Splash: The cross-over couple

A Bigger Splash: The pool

La piscine: The girl and the seducer (Birkin, Delon)

Theology of The Nonexistent God: Finding He Who Is Not