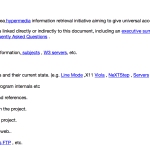 The first Web page was published by Tim Berners-Lee almost 26 years ago.

Again, I find this Web a quasi magical creation, made of legend and human ingenuity. Of course, built from the shoulders of people who contributed great ideas, like hypertext. Ted Nelson and his utopian Xanadu mythical landscape; Vannevar Bush and his vision of As We May Think; and then the ideas of the Open Web. The Web was born open and its defining software was explicitly published by CERN with a public domain license. Notice the definition in that page: “[…]aiming to give universal access to a large universe of documents.”

Yes, because the Web was conceived and built outside of the usual corporate, industrial, close world. Had Novell or Microsoft designed the Internet or the Web, we wouldn’t be here today. The Web revolution is happening because it was deemed open from the start, made and grown publicly. Away from corporate culture. Do you remember Novell? There was a time you could not build a network if you hadn’t paid some dues to Novell; it was almost a monopoly.

A marker for how much impact one person can have. Both before and after it was assumed that only big companies could make world-changing software. How wrong that idea is.

The great thing about the web is the diversity it brought about. The mistake we’ve made, 25 years later, is being so distracted by money and the appearance of engagement that we have turned that wonderful diversity machine into a monoculture. [my boldface]