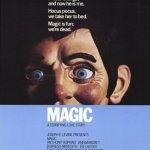 It’s pure terror: A moving mechanical doll is advancing toward you, and there is nobody else in the room. Not many have used this imagery to tell stories in cinema, while a lot of directors have used the simpler (but not less scary) image of a static (sometimes talking or grinning) doll.

Nevertheless, the image of a doll somehow, when extrapolated from the right childish context, gives the creeps. What scares is the difference factor: the common element in a completely unfitting context.

This is what impressed me after viewing again one of Dario Argento’s classics: Profondo Rosso, or Deep Red (1975), not really an horror movie, but a mix between a classic whodunit thriller  and some gothic elements.

What’s the creepiest mechanical doll ever? Tick tock, tick tock. […] Not familiar with the mechanical porcelain terror that I’m speaking of? Take a look below in the clip:

Oh yeah. I should have also mentioned that there was a pretty gnarly teeth bashing scene in there, as well as some groovy over-the-top soundtrack music from the band Goblin. Only sweetens the deal if you ask me. The focus is on that random mechanical doll in the cute little tuxedo though.
[Both quotes from dirtyhorror.com]

As usual, the Web is full of mementos of films with dolls (mechanical or not) being used as horror motifs. Here is one Short History of Creepy Dolls in the Movies and here the 8 Horror Movie Dolls That Will Give You the Creeps.

Enjoy this, now that you’re at it (from Richard Attenborough’s Magic).