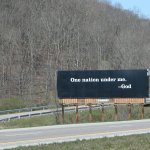 Fascinating. If finding an existing God already proves difficult to many, imagine a nonexistent one! A whole theology built around a nonexistent god would then seem byzantine at the very least.

“The world,” we read in the Gnostic Gospel of Philip, “came about through a mistake.” The demiurge who made it “wanted to create it imperishable and immortal,” but eventually he “fell short of attaining his desire, for the world never was imperishable, nor, for that matter, was he who made the world.” The Gnostics believed nonexistence to be a mark of perfection, and coming into being a form of degradation.

Basilides, one of the most intriguing figures of early Gnosticism, believed that the highest attribute of divinity is its inexistence. By his own account, Basilides was a theologian of the “nonexistent God”; he referred to God as “he who is not,” as opposed to the maker of the world, trapped in existence and time.

[Quote from Why Do Anything? A Meditation on Procrastination / Costica Bradatan THE STONE SEPT. 17, 2016, The New York Times]

Now, what I find most fascinating here is the apparent contradiction of a nonexistent God: He Who Is Not. Wow. This is powerful. A fully dematerialized god. In fact, one god quite difficult to meet, if at all possible. So, the nature of nothingness of this god seems quite similar to the nature of the mathematical concept of the empty set: a set void of anything. Not even space void is so absolutely void as the empty set. Yet, the empty set does exist.

But what is also fascinating to me is the absolute metaphysical blabbing that can bring philosophers to state this, the most profound and light concept of He Who Is Not. Sure, the lightness of it all makes it even more unbearable. But also fun.

Oxymoron? It would seem so, but let’s not be that quick to jump to conclusions. In the end, saying “He Who Is Not” implies naming Him. But the simple act of naming someOne or someThing Does Not Make Him/It Be. Example: The famous (if nonexistent) flying spaghetti monster who lives–I am assured– on some orbit on the dark side of the moon. Since unobservable, nobody can disprove the assertion (Apollo missions did not see It, which of course does not prove Its nonexistence). Still, the burden is on proving the assertion, which of course cannot be done. Also, naming the monster does not make it pop into existence. So, He Who Is Not: We do name a He and we state that He has a property, namely that of nonexistence? Wrong!!! If He Is Not, Then He Hath No Property. Saying He Who Is Not is just a language trick. However, it is fascinating to me how absence of existence gets extrapolated into existence of absence and hence, the adoration of the latter.

Does this seem like the famous Gödelian game of “I never tell the truth”?? No, I think it’s much less deep. But not for this reason, less fascinating. It’s the old game of trying to trap the unbound into our modest language technology.

The post Theology of The Nonexistent God: Finding He Who Is Not appeared first on Skate of the web.