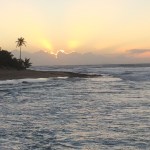 The new year sounded good from the aquamarine waters of western Puerto Rico, where we had the luck to spend New Year’s Eve. This is the door to tranquillity at Crushboat beach at Aguadilla.

And this is the very first sunset of the year from this latitude, over the magnificent horizon.

The night before, New Year’s Eve, we had a wonderful night on the beach too, with a fantastic bonfire.

Of course, sooner or later there would be someone with good loudspeakers sharing his (always a male) fancy muzak.

Fortunately, one could turn his attention to a good book. This one I just began the night before and did savor it on the beach. It’s Roseanna, the first novel by the Swedish duo Maj Sjöwall and Per Wahlöö (husband and wife in real life), with the celebrity detective Martin Beck. Nice and calm, the most gruesome and horrible crime gets committed and they turn on their typewriting machine and little by little the story unfolds, stopping only at the end. This is the foremother of all the nordic crime stories, including Wallander and Stieg Larson.

Of course, what the

! A nice beer would finish off the first day of the year in style, on the rocks of the Aguadilla lighthouse ruins, just on the northwest corner of this awesome island.

[All photos by moi meme. License is granted through CC: BY-SA-NC]

The post The New Year. Sounds good, from western Puerto Rico. appeared first on Skate of the web.